I raced a race the other night and I really enjoyed it. The car was a lovely little Renault Megane Sport and the track was Mount Panorama in Australia. The circuit is amazing and I’d love to see some real racing there one day. The car performed well and was remarkably balanced for that circuit, the braking was sharp and there wasn’t much under-steer, I didn’t notice any over-steer. I sent the video to YouTube and you can watch it below:

I like the way the red rims on the wheels make it look like I’ve got proper glowing brakes. A reason for publishing this video was to bump a band video down my list a little, it wasn’t a good performance.

“The Weekend Of Noise”

I spent a few delightful hours at Brands Hatch over the weekend to watch the Blancpain GT Series Sprint Races. I do like this type of car. I think I have grown out of F1, it’s not that interesting and full of masses of bullshit. I prefer the “honesty” of GT and Le Mans Prototype type racing. This closed-wheel racing seems more fun and spectacular. I know these cars don’t really bear much more than a passing resemblance to their road-going cousins but I like the look, sound and overall racing of these vehicles.

The first part of the WEEKEND OF NOISE was a trip to Norwich for Thrashersaurus. This was the second part of the weekend and my ears were still ringing from seeing Xentrix play the Brickmakers.

The day started with a free pitwalk and a chance to get close to the cars and drivers. Hence the above picture.

Anyway, the first race watched was the GT 4 European Series with many cars on the grid it was pretty good but there was a number of safety car periods and this stifled the racing somewhat, but it did mean there was a good lot of close racing.

I did like the KTM cars which had a lovely rear end.

After that was the first of the sprint races for the GT series and the hour of racing included a pitstop and driver change. It was an impressive sight and good fun to watch. The weather was perfect, lovely and sunny. You know it’s summer when the circuit commentators are reminding spectators to put on plenty of sunscreen.

The beginning of the race was a rolling start and I captured it here:

As I watched the race from the Brabham Straight I got to see the podium celebrations:

It was a good day with plenty of noise and ice cream.

It’s very nice being back at Brands Hatch. It’s the place I spend an awful lot of 2004 and 2005, almost every Sunday. Not sure I could have that commitment again but a couple of times a year seems a good start.

Just because I can, I decided to have a go racing a similar race to the GT series on Gran Turismo and, just because I like most of you, I have uploaded that replay on to YouTube. Enjoy (or not).

Having looked recently at the energy I use in the house and while driving I thought I’d turn my attention to not-real things. Specifically my racing life within the game Gran Turismo Sport.

Here is a collection of my pink cars taken in Hawaii. I like the photo mode in the game but it’s not the be all and end all for me. I have seen some people comment that the car editing and photomode tend to be their favourite parts but not me. I like racing the cars and the other aspects of the game are incidental.

There’s a page of achievements that encourages you to play more:

So, the achievements page will give actual figures and from that I can work out my average speed and fuel consumption.

So, my average speed is 96 miles per hour. Given that some tracks are quite twisty I think that’s a pretty good speed. Even more so that I have spent the time to complete all the licence tests and every track experience. I do tend to race in group 3 or 4 cars as I find them the most fun.

I have no idea how this fits with real racing cars. We can have an estimate I think. Current F1 cars have a tank that can hold 100kg of fuel which is about 125 litres. F1 race distance is mandated at at least 305km. I’ll do the maths for you again and the fuel consumption turns out to be around:

I guess that this all seems reasonable. A high fuel consumption within the game that matches the real life is probably closely worked into the game and I’m happy with the figures the game has produced.

I don’t like the use of miles per gallon as we should, by all rights, in this country use the standard of litres per 100km as the rest of the EU does but people don’t really want to change, especially those old weirdos in power and the media.

Here, just for fun, is a list of corners I still strugglw with in Gran Turismo Sport. I can’t consistently take these corners in a manner that makes me feel I’m getting the lowest lap time.

I’m looking forward to a new motor racing formula that will be debuting soon. Formula E is a new idea for racing where the cars are entirely electricity powered.

The cars look great and having seen some television clips they look pretty fast too. There’re some big name drivers involved in developing this sport further, more on the Formula E website.

This is going to be broadcast on ITV4 in this country and then highlights on BT Television. It’s worth a look I reckon.

I am aware this is quite a low-key communication from me, but I was going to write about Suffolk but you’ll just have to wait. As a teaser I would just say that you should always try to get on the A12 when heading to Kent from the East Coast rather than be completely unaware and realise you’ve gone wrong as you pass Newmarket. As I’ve mentioned Newmarket, have a look at the Suffolk county border around Newmarket – crazy.

It has been quite a few years since I went to watch something at Brands Hatch. The circuit isn’t far from where I live and I used to go an awful lot before getting children. I decided to take the sons and show them what racing is like. I chose to go take them to a club weekend rather than a large event. My reasoning was that it wouldn’t cost me much, there wouldn’t be that many people around and if they hated it after 30 minutes it wouldn’t bother me too much to leave.

We went to see the MG Car Club race weekend. These cars looked good and there were races from Ferraris too. For the race report from the weekend then look here. This picture is from the MGCC website. 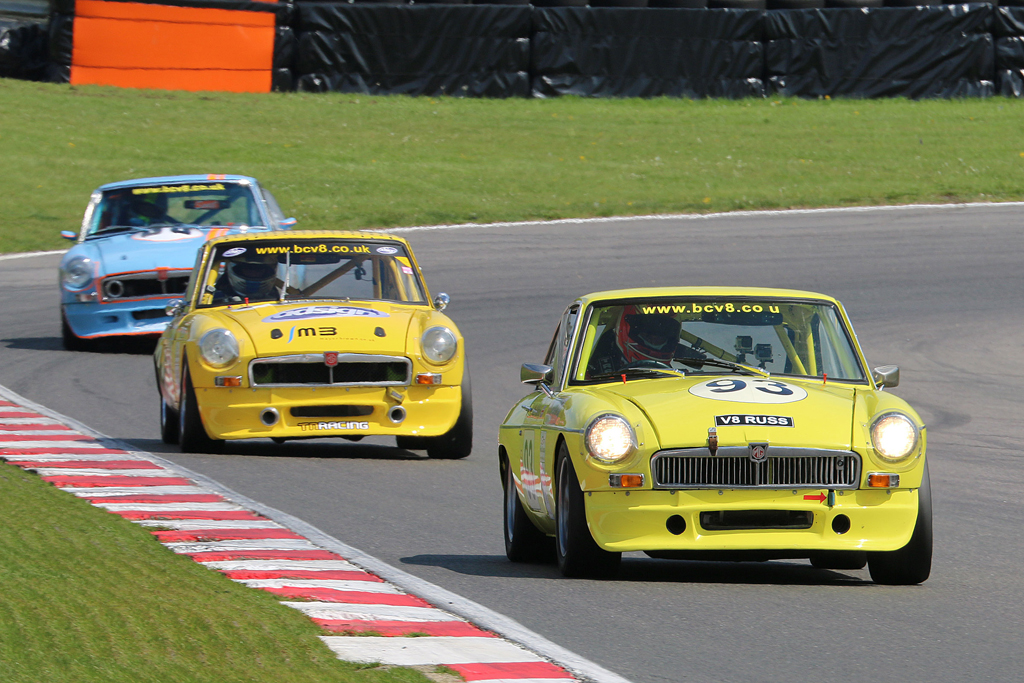 This picture shows my sons running up the hill to the inside of Druids corner so they could see the cars racing around the hairpin.

And here is the view from the hairpin.

I probably do it all wrong. I’ve no idea what other people do. It’s not what should be done in real life.

I recently started a line of communications looking at my progress through GT6. There’s a definite pattern to my play. I have made the following conclusions:

This approach isn’t what should happen in the real world. No-one could afford to pay me to drive and crash as much as I do. If I was driving in real life I would need to have an innate understanding of where the limit of traction and how to improve speed around a track. I would also, I hope, have better reactions to control the car. To get such a deep understanding I would need to have been driving and undertaking purposeful practice for a long time. It’s no surprise that the world’s best racers in any of the top formats started racing and driving when they were young and so effectively know no different.

To learn to race a car as fast as possible would require a certain number of crashes and offs, but not as many as afforded me in the console game. There’s no danger to life in the game, I just press restart.

There are some of you who might be thinking that I need to change my approach and that you want to tell me I don’t do it the right way. To you I say, “maybe” and “I know”. It’s something to work on in the future.

So, firstly I’m ashamed of the placing in this result table from Gran Turismo 6. Sixth place is pretty shocking. I hate the Kart races, the tracks are generally tight and small and the Karts are somewhat twitchy. Anyway, I’m glad I snapped this one with the phone because I don’t think it’ll happen again.

6th Place with a time difference of 6.666 seconds.