I’m pretty sure that a friend of mine, Mark Hodges, gave me this on tape initially. I expect that at some point I went and bought the album but I don’t have my usual clarity on personal album history with this one. I remember liking the Crüe from Girls, Girls, Girls onwards. All that 80s metal came at the right time for my teenage years when humans seem to make most of their musical brain connections. There might be a PhD in there somewhere, I know people ten years older than me who either really love the 70s rock – Pink Floyd – or Ska or Punk, the link between those formative years of brain changing chemistry and the music that rebels at that time seem strong.

I do enjoy this album, I love that trashy L.A. sound but these days I feel slightly embarrassed at the obvious sexism within the industry and songs. I don’t necessarily think that these bands were socially unaware I just think that the zeitgeist was a pretty bad place. Until a few years ago I would have said that the world was heading in the right direction and becoming more tolerant of differences but I’m not so sure now. Hatred seems on the rise and it saddens me. Maybe the only silver lining will be the eventual destruction of most of the population through climate change. Perhaps then those that remain will be able to rebuild a fairer society.

Every Mötley Crüe album has a shit song. It’s almost as though they do it deliberately. There’s Nona on GGG and this album has God Bless The Children Of The Beast. These additions seem to be short songs and utterly terrible. I don’t know why they did it. I’m not sure I care but skip these songs I will. 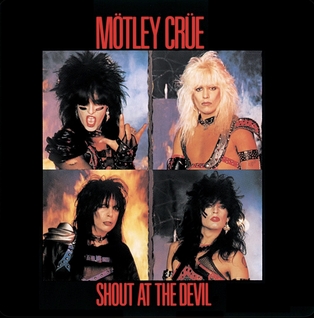 Have you seen a bunch of men look more scary? The overtly heterosexual band Mötley Crüe going out of their way to shock and horrify the older generations while endearing themselves to the youth of the time by rebelling and scaring the baby boomers. This stuff freaked people out! They thought all this loud music was caused by the devil and tearing their children away from their control. A small secret is that all children seek to provoke and find themselves, they aim to select something to make them different, make them stand out, make them original. The irony of this is that we’ve all been there and some of us tolerate it while others condemn. I’m always curious to see how the next generation finds their “thing”. I’m old enough to have been around the block a few times and have seen the rebellion time and time again. Maybe my professional life helps keep me informed also? The close contact with the next set of teenagers and hearing about how they get their identity. It’s just a shame so many of them seem greedy and a bit “tory”.

If you want to see what shocks the “grown ups” then have a look at the Daily Mail and see what they show of the younger generation. I suspect it’s all about the drugs and parties, especially for the DM because then they can show pictures of young ladies behaving bad and there’s nothing the older DM reader likes more than looking at pictures of young ladies behaving badly. This also goes for the Daily Telegraph. To some extent I think it comes down to the oldies being jealous of the care-free days that they lost and won’t find again. All that awaits is the slow degeneration of bodies into permanently aching lumps of meat before death and so those in charge of society get upset at what they have lost.

I enjoy this album and would recommend it to any of you.